Just 20 metro areas account for 59% of worldwide retail and wholesale colocation revenues, according to new data from Synergy Research Group.

Ranked by revenue generated in Q3 2017, the top five metros are Washington, New York, Tokyo, London, and Shanghai, which alone accounting for 26% of the worldwide market.

The next 15 largest metro markets account for another third of the worldwide market. Those top 20 metros include ten in North America, four in the EMEA region and six in the APAC region.

Across the 20 largest metros, retail colocation accounted for 72% of Q3 revenues and wholesale 28%. In Q3 Equinix was the market leader by revenue in eight of the top 20 metros and Digital Realty would be the leader in five more if a full quarter of the acquired DuPont Fabros operations were included in its numbers. 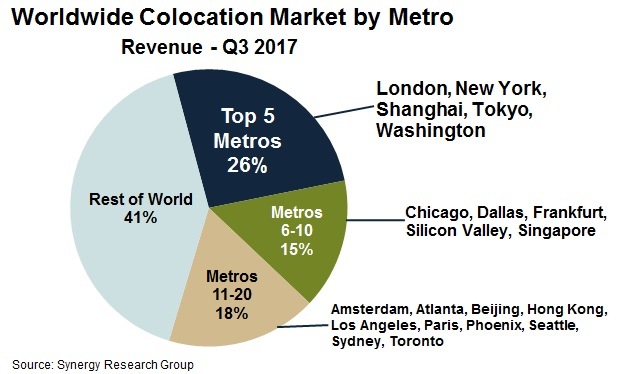 Over the last four quarters, colocation revenue growth in the top five metros outstripped growth in the rest of the world by two percentage points, so the worldwide market is slowly being concentrated more in those key metro areas.

“While we are seeing reasonably robust growth across all major metros and market segments, one number that jumps out is the wholesale growth rate in the Washington/Northern Virginia metro area,” said John Dinsdale, a chief analyst and research director at Synergy Research Group. “It is by far the largest wholesale market in the world and for it to be growing at 20% is particularly noteworthy. The broader picture is that data center outsourcing and cloud services continue to drive the colocation market, and the geographic distribution of the world’s corporations is focusing the colocation market on a small number of major metro areas.”