South Korean incumbent telco KT has unveiled a next-generation platform for disaster and safety management – in the form of an unmanned 5G blimp.

The new “Skyship” platform comprises a 5G aircraft and a mobile communications center to remotely control drones and robots that carry out search and rescue operations for disaster survivors. Rescuers on the ground are also assisted with augmented reality (AR) glasses that have a direct line of communication to doctors at nearby hospitals for assistance delivering emergency treatment.

KT says it developed the Skyship platform to diversify its 5G offerings ahead of its scheduled official service launch in March 2019. KT plans to complete an even better 5G-based disaster safety platform with the third version of the Skyship aircraft by 2020. Read more …

Nokia and Tencent in R&D pact for 5G vertical apps

Nokia and Tencent have signed an agreement to carry out joint research and development work to explore the potential of 5G for the provision of new applications, including those for a variety of vertical markets.

Under a Memorandum of Understanding signed by the companies at last week’s Mobile World Congress Shanghai, Nokia and Tencent will establish an end-to-end 5G test environment in Shenzhen, and conduct 5G applications research using technologies such as edge computing to benefit a number of vertical markets. This will potentially open up the widespread introduction of applications such as Cellular Vehicle-to-Everything (C-V2X) and enhance the delivery of services such as cloud-based gaming and entertainment.

Going forward, Nokia and Tencent will leverage the artificial intelligence and automation management capabilities enabled by 5G to promote international standards and an open-source ecosystem to expand the development of new services. Read more … 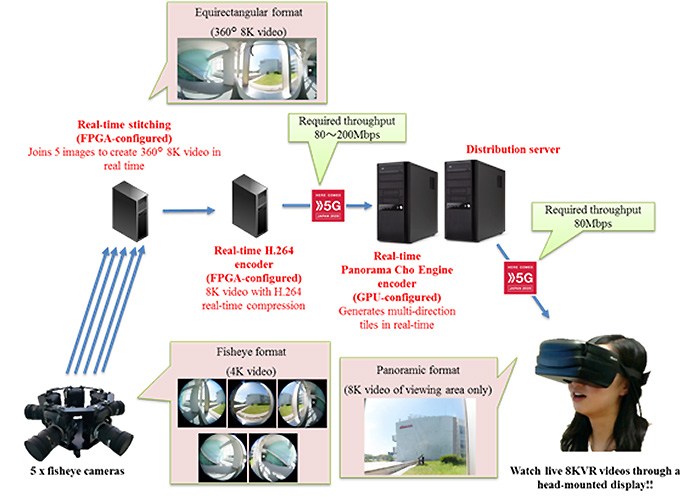 The heavy demands of processing 4 x 4K video for real-time stitching and compression into 360° 8K video is difficult to achieve with software. DoCoMo’s solution was to use an FPGA for extra-fast processing and an algorithm for high-density mounting (which maximizes FPGA processing) at 30 frames per second (fps).

The system will be exhibited at DoCoMo 5G Open Lab Yotsuya, which offers several 5G technologies for testing in collaboration with more than 1,500 companies participating in the DoCoMo 5G Open Partner Program. Read more …

5G NC operates independently of the LTE network, and was developed with a new service-based architecture that introduces software features, such as control and user planes separation, network slicing and virtualized network functions deployed on containers.