Spending on cloud infrastructure services in Q1 2018 jumped 51% from the first quarter of 2017, comfortably beating the growth rates achieved in the previous five quarters, thanks in no small part to Amazon Web Services (AWS), according to new data from Synergy Research Group.

Amazon was a major contributing factor, as growth of its AWS division was also the highest achieved since late 2016, Synergy Research says. AWS worldwide market share has held steady at around 33% for twelve quarters now, even as the market has almost tripled in size.

As the cloud boom continues, Microsoft, Google and Alibaba have all substantially grown their market shares, but this has not been at the expense of AWS. It is the small-to-medium sized cloud operators who collectively have seen their market shares diminish. Meanwhile IBM’s market share has been relatively stable at around 8%, thanks primarily to its strong leadership in hosted private cloud services. 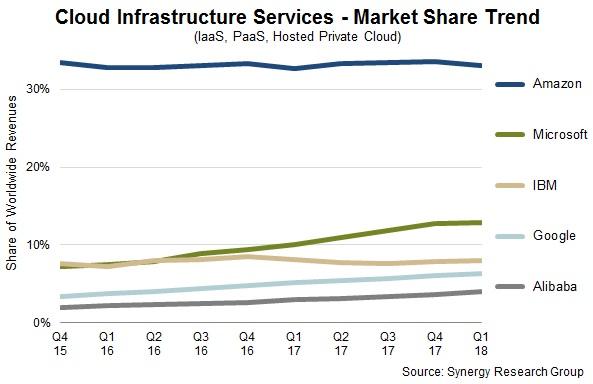 With most of the major cloud providers having now released their earnings data for Q1, Synergy estimates that quarterly cloud infrastructure service revenues (including IaaS, PaaS and hosted private cloud services) have now reached almost $15 billion. The Q1 growth rate of 51% compares with a full-year 2017 growth rate of 44% and a 2016 growth rate of 50%.

Public IaaS and PaaS services account for the bulk of the market and those grew by 56% in Q1. In public cloud the dominance of the top five providers is even more pronounced, as they control almost three quarters of the market.

“Cloud growth in the last two quarters really has been quite exceptional,” said John Dinsdale, chief analyst and research director at Synergy Research Group. “Normal market development cycles and the law of large numbers should result in growth rates that slowly diminish – and that is what we saw in late 2016 and through most of 2017. But the growth rate jumped by three percentage points in Q4 and by another five in Q1. That is good news for the leading cloud providers, whose historically high levels of capex are helping to ensure that they are the main beneficiaries of that exceptional market growth.”