The internet, some decades old now, was birthed in part as a research project of the American military which did not want to be reliant on the Ma Bell telephone network. The Internet has transformed our world, not to mention telecommunications, and its success has caught the attention of telecom regulators.

Given that so many subscribers have vacated the highly regulated public switched telephone network for mobile and internet communications, telecom regulators have scrambled to find something new to do. They promote concepts such as net neutrality and fake news to be relevant and to justify new authority to regulate new technologies. Meanwhile governments, which used to have a firm hand on communications, find themselves disrupted with the many ways that people communicate outside of their purview.

Policymakers invent problems, bogeymen, and villains to create a narrative which supports their desired regulation. Frequently the facts don’t match the reality.  For example, telecom operators have sold subscriptions to the internet for some 30 years; the price per megabyte has fallen by about 90%; speeds have increased 3,000%; and people consume increasingly larger amounts of data.  All the same, telecom operators are called “gatekeepers” and saddled with regulation designed to deprive them of shareholder value.

For example, when making net neutrality regulation in 2015, the Federal Communication Commission could name only a handful of minor incidents from nearly a decade earlier which it found to be problematic. Notably all were resolved without the need of net neutrality regulation. Similarly, in the EU, the European Parliament relied on a survey of contract disclosures some five years old to justify their rules. Note that the EU did not record a number of violations; instead it extrapolated a number based upon its interpretation of a survey. Those projections have never been tested.

As such, the debate about net neutrality regulation is absurd. My own company, Strand Consult, has published numerous reports and research notes documenting that telecom operators are not a problem, but policymakers and the media persist in their stereotypes, and they support making rules that legitimize the ability of telecom regulators to police networks.  Of the more than 50 countries that have adopted net neutrality rules, none offer any protection from governments that routinely block content.

One new report describes how 29 telecom regulators in the EU are interpreting the EU’s net neutrality law and BEREC’s non-binding guidelines.  A number of regulators have a religious view of the issue, and they are determined to exceed the EU law.  This is the case of Norway’s Nkom which pronounced zero rating as “greatest threat to the open internet.” Such as view not only exceeds the EU law and BEREC’s guidelines, but a 200-page report from the European Commission (which oversees BEREC) concluding that zero rating does not create anticompetitive concerns.

What is the real threat to the Open Internet

While many in the media and policymakers claim that telecom providers desire to block or degrade a free and open internet, the fact of the matter is that selling access to a free and open internet is the foundation of their business. Anything that a provider would do to diminish internet access diminishes the value of their service. This is why blocking by operators is essentially non-existent, and that is borne out in Strand Consult’s review of the 29 European nations. No country reports that its operators are blocking and throttling content.

But governments are another story. Where content is blocked, it is by government decree. Leading mobile operators in the US get several hundred requests per day for government agencies for information on subscribers. Many of the world’s leading telecom companies make transparency reports (Vodafone, Telefonica, Telenor, Verizon, Deutsche Telekom, etc) documenting the number and type of government requests and the many steps these companies take to protect their customers. These companies fight hard against political actors with tremendous power and incentive to police users. Even in a country like Denmark, one of the world’s freest nations, the telecom industry  struggles to defend consumers against a government that wants more control over the Internet including surveillance. Freedom House has documented the long-running decline globally of Internet freedom from meddling governments. Ironically this occurs as countries continue to make net neutrality rules.

Telecom operators provide more freedom and transparency than Internet companies. Facebook and Twitter can and do remove post of messages for which they don’t agree, and a user can be deactivated for no reason. Telecom operators deliver all communications regardless of the content, not because of regulation, but because they don’t want to be involved in the politics of their subscribers. Moreover, if you don’t like your mobile operator, you can switch. It’s pretty hard to switch from the leading internet platforms. Moreover, in order to do business in a number of oppressive countries, these platforms agree to the dictates of corrupt and authoritarian leaders.

Historically telecommunications companies were owned by the government; which many justified on the beliefs of national security and natural monopoly. But technology and human rights have defied these assumptions. Mobile is the world’s fastest growing network, even more than the internet, and governments are inefficient and suboptimal owners of communications networks. Private ownership of networks is good not just for technological purposes (government does a poor job of managing and innovating technology), but for reasons of freedom. It’s just too easy for governments to keep watch on citizens and their political enemies when they own the means of communications.

The conclusion is simple

The political justification for net neutrality regulation has been fact-free. Net neutrality rules are the result of advocacy by activists, not analysis by economists. Fortunately, some litigation has succeeded to turn back harmful regulation in the EU and with seven petitions siting at the US Supreme Court. There is also good news on the American front that the Federal Trade Commission (FCC) has proposed to restore the oversight of broadband Internet to the Federal Trade Commission (FTC), undoing the overreach of its rules from 2015. Importantly this removes the Internet from the government monopoly framework that the FCC used to regulate the telephone network, a regime so harmful that the Department of Justice had to break up the collusion between the FCC and the telephone monopoly.

But while it is necessary and important that operators litigate and defend their customers’ privacy against government intrusion, operators are losing the battle on internet regulation.  Desperate telecom regulators and well-funded, globally coordinated activists see the Internet as something too valuable to be left alone. Operators don’t take the fight, or when they do, they are not prepared. 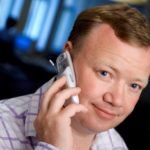 Written by John Strand, CEO of Strand Consult. In 1994 John founded Strand Consult. In the early days of Strand Consult the primary focus was on CRM – analyzing and evaluating sales processes and performance for the IT, Telco, Media and Finance sector and helping customers optimize these, enabling them to move more merchandise at reduced cost. He is one of the best-known and most respected consultants in the business.