As America and the world generally freaks out over Donald Trump’s surprise election victory, inevitably experts and pundits are dithering over the role of social media in this election – particularly in regards to the possible role of fake news in influencing the outcome.

Facebook in particular has come under fire for this, and Mark Zuckerberg’s response is that fake news accounts for so little of Facebook’s content that there’s no way you can realistically say it made any difference. 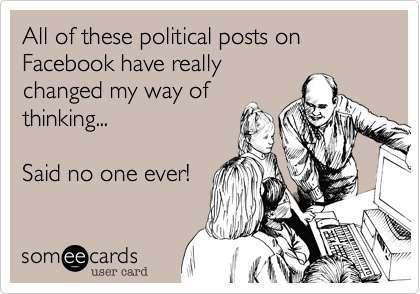 Even so, both Facebook and Google have said they will implement measures to prevent ads from being served on fake news sites, thus depriving them of money. But the problem is really more complicated, and it’s much bigger than fake news.

For a start, there are different kinds of “fake news” stories. Some sites intend to spread false information for political gain. Others, such as The Onion, are meant to be satirical and humorous. Does that count as fake news?

You can argue that The Onion and similar sites are clearly humorous – but it’s not always that clear when the story is posted outside of the context of the host site. It doesn’t help that that many people don’t bother to check where the link came from (which leads to things like this).

There are also blatantly partisan news sites that report stories that aren’t fake so much as highly apocryphal and one-sided. Do those count as fake news?

Then there are those viral political memes posted by political groups, trolls, etc. They’re the equivalent of chain emails claiming that people are waking up in bathtubs full of ice to find one of their kidneys has been stolen. Buzzfeed has some examples of them here.

More often than not, such memes are at worst completely false or at best intentionally misleading. I see more of these on my Facebook feed than I do actual news links (real or fake). And more often than not, people forward them without fact-checking them because they sound real and conform to their sociopolitical worldview. So, for example, if you already happen to believe that (and I’m just pulling an example out of the air here, really) Hillary Clinton is the evil genius behind an evil global criminal conspiracy, then you’re less likely to question any meme that comes across your newsfeed that confirms that point of view.

(Which, I suppose, raises a valid question: is the real problem Facebook not blocking or flagging such stories, or is it the sheer and sometimes eager gullibility of the people who believe them?)

If Facebook and other sites are serious about tackling this issue, they’re either going to need a big team of human editors to vet posts (and reportedly some Facebook employees have stepped up to do just that), or they’re going to need algorithms smart enough to know the difference between fake news and satire, and to recognize a meme that has false or misleading information.

That may sound like a gargantuan task. On the other hand, four college students at a hackathon at Princeton University have reportedly solved the whole problem with a Chrome browser extension called “News Feed authenticity checker” which they whacked together in about 36 hours, reports Business Insider:

“For links, we take into account the website’s reputation, also query it against malware and phishing websites database and also take the content, search it on Google/Bing, retrieve searches with high confidence and summarize that link and show to the user. For pictures like Twitter snapshots, we convert the image to text, use the usernames mentioned in the tweet, to get all tweets of the user and check if current tweet was ever posted by the user.”

The plug-in even adds a tag saying whether the story is verified. The students have released the extension as an open-source project for other developers to tweak.

Well, it’s a start. And it’s good that someone is working on a solution, because we need them, badly. I only have my own social media feeds to go by on this, but I suspect the problem of fake news and false information is far more widespread than Mark Zuckerberg perhaps cares to admit. And I think it did have some level of impact on the election – at least in terms of encouraging and strengthening the hyper-partisan sociopolitical echo chamber bubbles that so many people live in these days and mistake for reality.

(It’s not just an American thing, by the way – I see it here in Hong Kong as well with the political arguments over Hong Kong democracy and the localist movement that advocates independence from China. And in some countries, misinformation on social media can lead to genuinely terrible things.)

It’s sad that the spread of misinformation is one of the great problems of the digital age. Or, as John Lawton put it over 20 years ago, “The irony of the Information Age is that it has given new respectability to uninformed opinion.”