Last week saw unprecedented outpourings of joy from the world’s technology press celebrating the death of a once very-loved app: Klout. The relatively new owners of Klout announced that after ten years of existence (and a $200 million acquisition cost) it was to be “put down” on the very day that Europe’s GDPR (General Data Protection Regulation) will come into effect. Coincidence, perhaps?

For those of you that don’t know about Klout (or don’t wish to admit to using Klout), it was an app that attempted or purported to measure how important people were on social media by quantifying online influence and assigning a zero-to-100 score based on their social media followings.

It was founded in 2008 by Joe Fernandez, partly as a way to get a job at Twitter (according to rumors), and it fast became the tool of choice for social media influencers and wannabe-influencers who flouted their Klout scores to each other and potential employers – even to gain status for access to parties and perks that rewarded high Klout rankings.

As Matthew Hughes from TNW wrote:

“No more will it rank ‘social media gurus,’ ‘influencers,’ and other assorted nebulous gobshites by a criteria that was arbitrary and didn’t make sense. Klout scores, once carefully cultivated like an opium crop, will wilt away into dust.”

Strong words indeed, but as Will Oremus from Slate wrote:

“Ironically, something like a Klout score might be more useful now than it was back when people actually used Klout. No one wants their worth as a human reduced to a single number, of course. But algorithms that can effectively distinguish legitimate sources of original information from, say, Kremlin-backed troll accounts, could come in handy on a site such as Twitter. For better or worse, Klout bungled that project so badly, with its inane scoring system, that no company wants to build the next Klout.”

Well, not surprisingly, someone has.

The app is unashamedly called Skorr. Its timely release just prior to the Klout obituary may provide a viable alternative for the many millions of Klout users that actually did love the app, and also for companies trying to get an honest assessment of influencer’s true worth. And it offers almost everything Klout should have done if its owners had bothered to up to date with today’s rapidly changing world of privacy issues, fake information and data security.

Klout was primarily touted as means of determining one’s social influence by simply offering a score with virtually no explanation as to how that score was achieved or what one could do to improve it. Skorr also provides a familiar numbering metric between 1 and 100, but that’s where the similarities end. Rather than focus on the number – or Skorr – as the end game, the figure produced is meant to be more of an instant gauge of your social media performance. Skorr should be successful where Klout has failed – here’s why.

First, Skorr was built using technology that didn’t even exist when Klout was developed. Its developers claim it utilizes the latest machine learning and AI technologies to provide a rich set of fact-based analytics that guide how the user can improve their effectiveness including sentiment analysis, natural language processing and shortly, image recognition. This will include built-in ‘safety’ features that alert users when potentially private information is being shared (credit card numbers in a photograph, for example).

So think of Skorr more of a social media cockpit than a simple number generator.  Secondly, this technology constantly monitors all social activity, including the type of content – text, images & video, across six social platforms (currently), a vast improvement over Klout’s Twitter-centricity. Finally, and perhaps most importantly in this current environment, Skorr is designed from scratch to comply fully with all data privacy regulations, including GDPR which was likely the final nail in Klout’s coffin

In today’s social media world, success is about engagement and quality content, not volume. Klout was largely based on who was most active on social media rather than who had an engaged audience. High scores were achieved by people who simply tweeted more, retweeted often, did not distinguish between “followers” and those being followed, and had no regard for the content, number of “likes” or actual engagement.

Perhaps the most valuable tool is the grouping of all posts into lists such as ‘Most Liked’, ‘Most Talked (About)’, ‘Most Shared’ and, for the most successful ones, ‘Killer Posts’. Skorr is more focused on the content quality and positive engagement that surrounds it than simply cranking out posts in volume with no regard to their effectiveness or impact.

What early adopters like most about Skorr is the insight it delivers in a very efficient, user-friendly way. Any single post (from any platform) can be drilled down with one click to reveal a graph of the number of reactions, comments and shares plus a visual bar graph showing all the sentiments evident in the post. Scrolling down reveals all the comments the post generated, where the comments were posted and by whom. Unlike Klout, Skorr determines what areas you are strong or expert in rather than allowing you to nominate whatever you want. 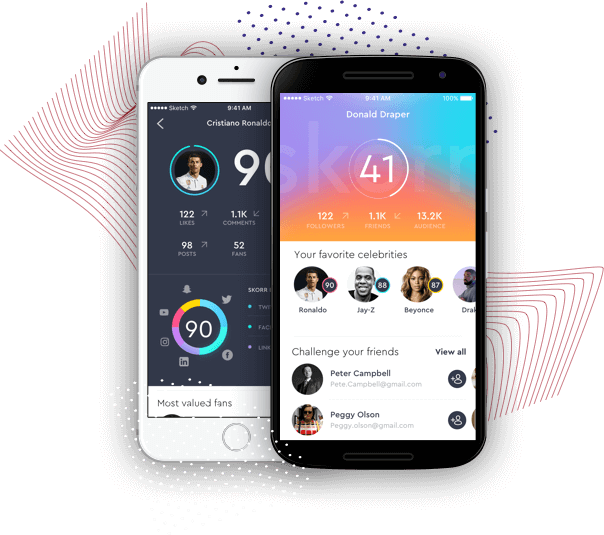 On the surface, Skorr provides teenagers and millennials a competitive platform (soon offering the ability to set up Challenges between friends) but it also guides them towards more responsible and impactful social practices by analysing and classifying the tone and sentiment of their content. For iBranders (individuals or small businesses) it helps them to target their market more accurately and effectively by immediately gauging what content, placed where and when, gets the best response. And for corporates banking on influencers and micro-influencers as a critical part of their go-to-market strategy, Skorr will offer the most accurate assessment of their potential impact, prior to making the investment.

Klout may be dead, but social media is alive and well as both as a popular communications medium as well as a powerful marketing channel. A state-of-the-art app like this is well positioned to deliver on what Klout users always hoped for. See for yourself – you can download Skorr here.