It is not often that vendors promote disruption, except in a PowerPoint ‘we’re on it’ kind of way. It is also not often that you see papers from vendors saying that the vendor/operator relationship is broken and needs to be fixed. That, however, is exactly what a new paper from Openet declares.

And it is, in their words, a manifesto.

As Niall Norton, Openet’s CEO says in his open, introductory, letter, “Candidly, many vendors operate a zero-sum game. Their inability or unwillingness to provide technological and commercial propositions that meet your business needs defines their engagement model.”

Of course, the paper is not an altruistic cry for the industry that talks about agility and disruption to actually change overnight. It says, basically, that Openet has been investing in new technologies for the last five years, while examining the industry and the needs of their customers and this has led them to believe that things must change. 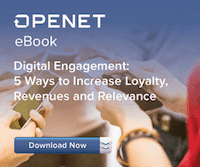 The age of the huge transformation is over, says the paper. Boasting about a billion-dollar, five-year project to overhaul a ten-company group BSS should cause laughter, not admiration. As Openet COO Jon Ross says, “We do not know where the industry will be in five months’ time, let alone five years.”

This is definitely a stab at the large vendors (with whom they will willingly work to solve an operator’s problems), and the timing is interesting. The recent Gartner Magic Quadrant for what they call Integrated Customer and Revenue Management (IRCM) came out a few weeks ago.

That is not interesting. What is interesting is that for the first time, Gartner published the Quadrant with Peer Insights, where operators can comment on the vendors that are under scrutiny. While the Tier 1 vendors are still where they always tend to be, when you look at the Peer Insights, the Tier 2 vendors come out on top, by a long way.

The Openet paper is detailed in its thinking and believes that, for instance, the choice of “formulas or the cook book for solutions” should lie with the operator. This allows for complete transparency and eliminates vendor lock-in, maintenance and the upgrade culture that shackles the relationship and thus the operator’s ability to properly innovate.

Automation is a big part of the Openet argument, as are pre-integrated modules, adjunct solutions and pricing.

As Openet executives have said in the past, the game has changed from roadmaps and upgrade paths to solving operator problems in the most effective way possible. Sometimes this means that they solve the problem and get no business – other times, it brings business aplenty. This approach, the company believes, will help transform the old telecoms way of thinking to new web-style thinking, which – as we hear on a daily basis – is vital.

Whatever the motivation for this paper, and many will question it, it is a gauntlet for the industry – stop talking about agility, digital transformation and web style offerings, and start doing it. It is also a wakeup call to larger vendors to truly think through how they engage with their customers. We still hear of multi-million dollar write-offs on large transformations, and that is not good enough in anyone’s book.

That said, the paper concludes that Openet wants to be more like SpaceX than NASA, more like Tesla than General Motors. So, you would imagine, would everyone.