A new consortium comprising seven APAC telecoms players – plus Facebook – have signed a deal with NEC to build the Southeast Asia-Japan 2 (SJC2) submarine cable connecting nine countries across the region.

The SJC2 – the sequel to the original SJC subsea cable system, which was completed in 2013 – is backed by China Mobile International, Chunghwa Telecom, Chuan Wei, Facebook, KDDI, Singtel, SK Broadband and VNPT.

The system will span 10,500 kilometers and land at eleven locations. The cable sports up to eight fiber pairs with initial design capacity of 144 Tbps.

According to Atsuo Kawamura, senior VP of NEC’s Telecom Carrier Business Unit, that works out to a design capacity of at least 18 Tbps of capacity per fiber pair. 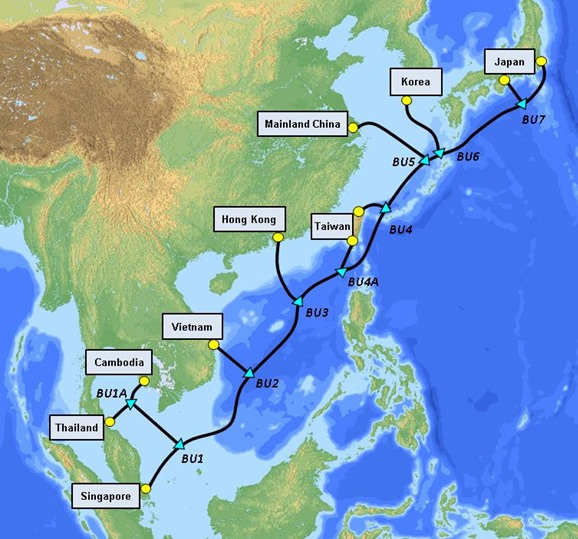 The SJC2 has some overlap with the original SJC cable in terms of countries connected (mainland China, Hong Kong, Japan, Singapore and Thailand) and consortium partners (China Mobile, KDDI and Singtel back both cable systems).

The original SJC also touches base in Brunei and the Philippines, which SJC2 does not. Places the SJC2 will connect that the SJC doesn’t include Cambodia, South Korea, Taiwan and Vietnam.

Google was the token non-telecoms player to back SJC, while Facebook is backing SJC2.

Construction of the SJC2 is expected to be completed by the fourth quarter of 2020.

Ooi Seng Keat, Singtel’s VP of Carrier Services, said in a statement that the SJC2 cable would provide additional bandwidth between Southeast and North Asia to enable digital transformation and innovation strategies across the region.

In a separate statement, Chunghwa Telecom chairman and CEO Yu Cheng said the SJC2 (which will land at two cable landing stations in Taiwan) would help support numerous multimedia applications the operator intends to launch when it fires up pre-commercial 5G services in 2020.

No price tag has been given yet for investment in the SJC2 system. The first SJC claimed an initial investment of $400 million.