SK Telecom has unveiled a miniature version of its Nugu artificial intelligence-powered speaker that sports new features such as movie info, financial services and an audio book service.

“Nugu” refers to both SK Telecom’s AI service based on voice recognition technology and the voice-activated Korean language-based speaker that uses it – the rough equivalent of Amazon’s Alexa software and the Echo speaker. SK Telecom says it has sold over 150,000 units of the original Nugu speaker (as of last month) since its launch in September 2016.

Nugu utilizes cloud-based deep-learning to evolve and strengthen its performance – including speech recognition accuracy – as its customer base grows. SK Telecom says over 130 million conversations are now stored in the Nugu cloud sever, which means its voice recognition rate has increased for children’s voice and Korean dialects.

The new Nugu Mini is smaller and can be used both indoors and outdoors, with a battery life of four hours. 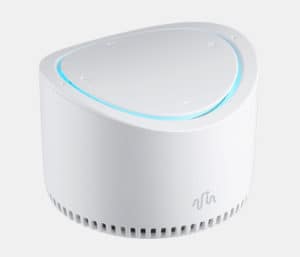 The Nugu Mini is manufactured by iRiver, which also makes digital audio players.