I think we all agree smart cities have failed to live up to the hype. Governments have spent years telling us they are going to create smart cities that will transform the way we work, live and play, yet while they had the best intentions, as citizens, we have failed to see the impact.

Don’t get me wrong – many cities are making progress deploying infrastructure-centric solutions (e.g. predictive maintenance, asset tracking, smart buildings) that deliver value to the city. However, few cities have delivered citizen-centric solutions (e.g. tourism, commerce, residential housing), and that is what we are waiting for.

So what holds the governments back? My view is few cities understand the complexity involved in creating a smart city. And even if they do, there are limits to how much they can do about it because of the three basic challenges:

In this article, I will examine Taipei’s innovative strategy to address these challenges. Taipei’s strategy brings together the supply, demand, and funding aspects of the smart city market equation and should be viewed as “best practice” for smart city and IoT ecosystem collaboration. I also will explain why I believe this strategy could become a “game changer” for smart city strategies globally.

Taipei’s smart city strategy focuses on healthcare, transport, public housing, education and FinTech, all of which are underpinned by cyber security. The goal is to turn Taipei into a “Living Lab”, but to accomplish this, they realized they had to facilitate innovation, drive cultural change and engage diverse stakeholders.

Taipei’s approach was to initiate a “government as a platform” strategy. They decided the city’s role was not to deliver everything itself – rather, its role was to become the enablement platform for the IoT and smart city ecosystem.

Conceptually this approach is not unique, but the way it has been delivered is.

The main difference came from Taipei city government’s decision to create the Taipei Smart City Project Management Organisation (PMO). The objective of the PMO was to go beyond managing Taipei’s smart city initiatives and to assume the role of the smart city ecosystem facilitator. To achieve this, the PMO planned a three-pronged approach to engage citizens, the government and the ICT community to create a “Living Lab”:

The PMO believed that by playing the role of the “middle man” between the government, the ICT community and the citizens, they could drive the collaboration necessary to deliver smart city solutions that deliver value to the city and its citizens.

Cities often create grandiose strategic plans for their future smart city, but those plans fizzle out due to a lack of resources, budget and commitment. Taipei has moved beyond “visioning” phase and has aggressively moved to the “action” phase.

First, Taipei captured the needs of over 30,000 citizens through public participation events.

Second, the top-down approach has seen them engage with over 20 Taipei government agencies to deliver government-led initiatives, including: 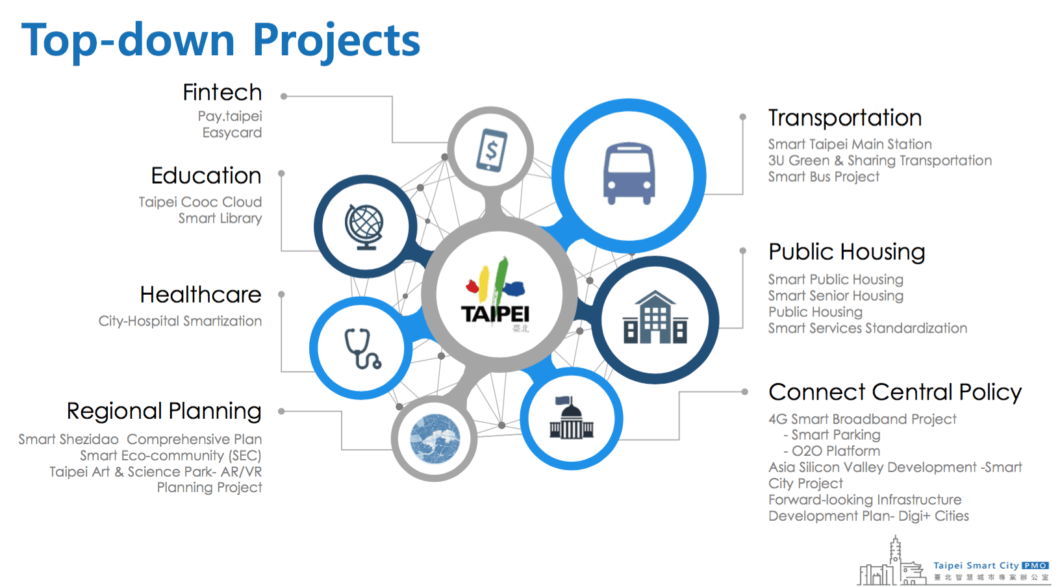 Finally, the bottom-up approach has seen them engage over 400 ICT vendors and research institutions and have initiated over 120 smart city projects, and this is just the beginning. 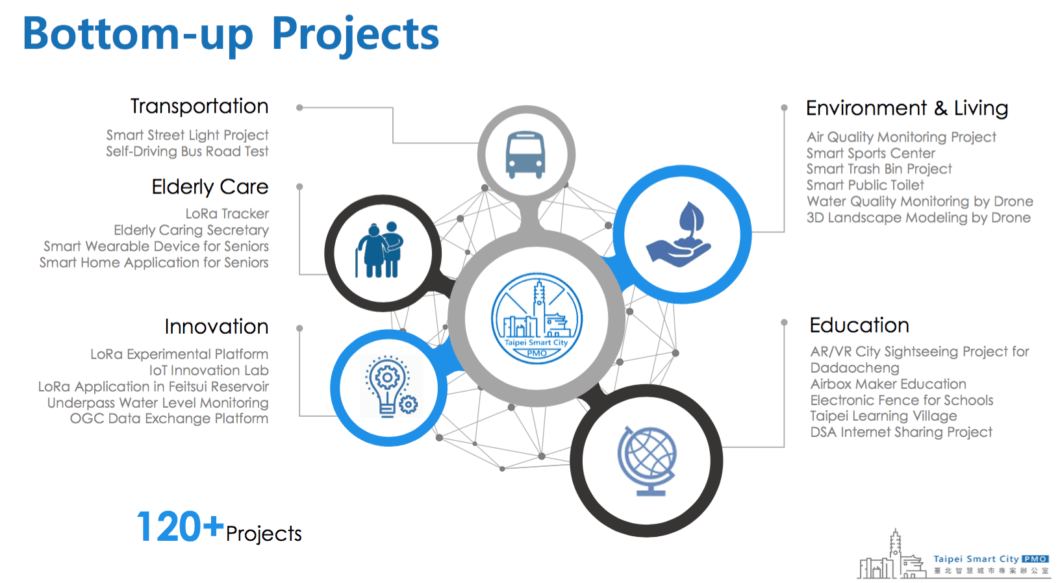 The “government as a platform” concept

To create a smart city, you don’t need dozens of solutions, you need thousands, and no government can identify all the necessary use cases, fund the initiatives and develop the solutions. Therefore, it is vital cities engage with the wider ecosystem for help.

To accomplish this, smart city teams must act as facilitators rather than blockers. They may not have budgets to fund the initiatives, but they can:

And that is what Taipei has done with its Taipei as a “Living Lab” concept.

Taipei launched an IoT Experimental Platform [PDF] to encourage innovation and speed up the commercialization of the solutions created. The platform acts as a testbed for companies, start-ups and individuals to create and deploy smart city PoCs across Taipei. It is early days for this initiative, but they already have engaged over 80 teams to deliver citizen-centric PoCs that cover Smart Environment, Smart Transport, Smart Healthcare and Smart Homes.

In addition, Taipei partnered with leading ICT vendors (e.g. Cisco, IBM, Acer) to support the operations of the platform and low power WAN providers to deliver connectivity via LoRa and Sigfox, with the latter’s Taiwanese operator UnaBiz providing 10,000 accounts for PoCs.

Not only can companies and citizens leverage this platform, but the PMO will support them to take their PoCs “live” at city-owned assets across Taipei.

For MNCs, SMBs and start-ups to create the next wave of citizen-centric solutions, cities need to make their non-confidential data (e.g. budgets, national maps, logistics information, environmental data) available to everyone.

This concept is called “open data”, and this is where Taiwan literally is ahead of the rest of the world. In 2017, Taiwan ranked #1 in the Global Open Data Index, with the only other Asian countries in the Top 20 being Japan (#16) and Singapore (#17). 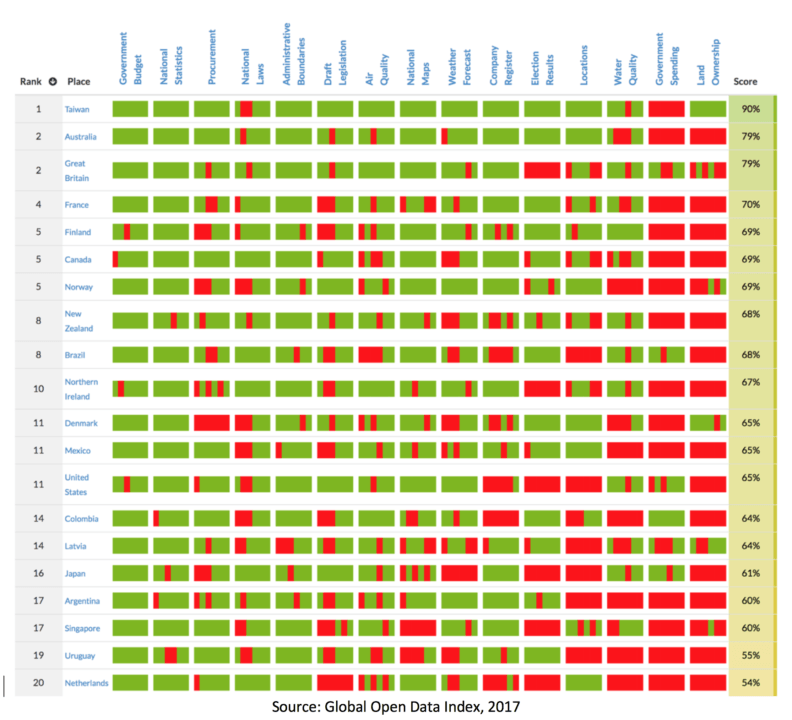 This level of access to data combined with the IoT Experimental Platform means companies and citizens in Taipei have the development tools and access to data they need – now it is up to them to identify the use cases and solutions.

Why it could be a game changer

I believe Taipei’s initiatives will be a game-changer because they found a way to address the main challenges – funding, resourcing and use cases.

No city writes blank cheques to support their smart city initiatives. They all have limited budgets, but most don’t understand they have other assets that can add value.

Taipei realized this – and by providing access to the city’s assets and infrastructure, they bring value to the table. Companies and citizens will be more willing to develop new solutions if they have the opportunity to deploy them as part of a smart city initiative. And even though it may only be a PoC, if successful, it could turn into a larger deal.

Taipei’s approach also led the ICT community to support the IoT Experimental Platform. These companies may donate equipment, resources and/or connectivity, but if the platform creates a number of PoCs that go to full deployment, they undoubtedly will get more business.

Taipei’s collaborative approach is a great way to get resources involved in identifying use cases and developing solutions. And part of the way they do that is by simplifying things for those resources. For instance, rather than:

The list goes on, but the important thing is that Taipei is trying to make it simple for the ecosystem to work with the city. And that collaboration is delivering benefits.

We have the technology to create smart city solutions – we just don’t know which solutions we need. The best way to overcome this challenge is to get the most people possible trying to solve it. And that is what Taipei’s IoT Experimental Platform does.

Think about it a different way. Why do we have millions of apps available to us on our smartphones? Because Apple and Android provided a platform that allowed anyone to simply and cost-effectively develop one and take it to market. Most will not become successful, but some will change our lives.

This is similar to what I believe Taipei is trying to accomplish. The more PoCs, the more solutions that potentially can deliver value to the city and its citizens, so why not make it easy and cost-effective for them? I doubt they believe all the PoCs will be successful, but if 75% fail, that means 25% will be successful. And that 25% will help Taipei on its way to becoming a smarter city.