We know that AI will replace some jobs in CSPs – we don’t know how many (yet). Either way, CSPs hate talking about it – here’s why they must, writes TM Forum managing editor Dawn Bushaus.

I have a friendly, ongoing debate with my colleague Aaron Boasman-Patel, the TM Forum’s VP of AI and Customer Experience, about the impact artificial intelligence (AI) and automation will have on jobs.

I am the ‘glass-half-empty’ type, so I worry that telcos and other companies are not doing enough to prepare for the job losses that will result. Aaron has a ‘glass-half-full’ perspective and believes that no one should fear AI, that while it will eliminate some jobs it also will create many new ones.

Our debate is likely to pick up again as we begin the research for our next Trend Analysis report on AI, this one focusing on AI in operations. We launched the survey this week, and I encourage you to participate if you are a communications service provider (CSP) or a supplier/partner. A report based on the survey will be published in January.

The new report will build on findings from our inaugural AI report AI: The time is now, published in December 2017. For that report, we surveyed 302 telecom professionals (187 from CSPs and 115 from suppliers/partners). At the time, I was surprised that only 37% of CSP respondents said that reducing opex was the biggest driver for AI in telecom networks. I had expected the percentage to be much higher. 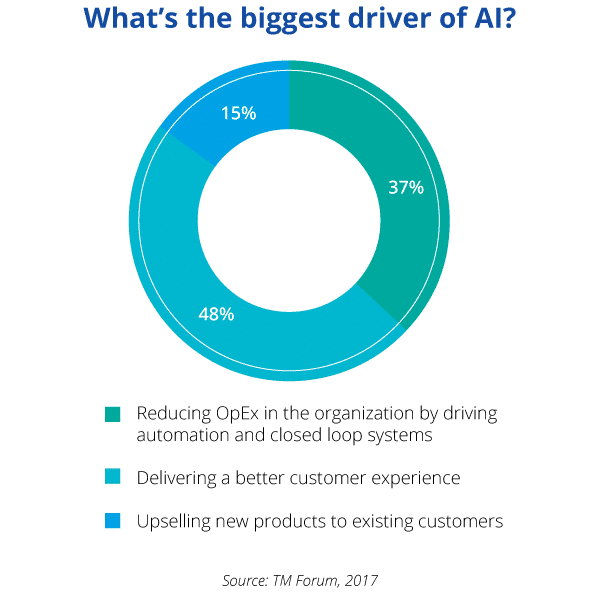 Recent polling and news coverage of AI and automation have found dramatically different results, so I am anxious to see whether the results of our new poll reinforce our findings or tell a different story. For example, Light Reading published a poll in April showing that nearly two thirds of respondents believe the primary driver for automation is increasing efficiency. (Light Reading polled 262 people but did not specify who the respondents were, i.e. whether they were all CSPs or also included suppliers and other CSP partners). Their poll was a bit more specific than ours, asking about cutting spending on manual processes, reducing headcount and releasing staff for other activities.

Iain Morris, author of the article about the poll, explained:

“As feedback noted, there is obviously some overlap between the various options, but each response indicates at least a slightly different priority. For some operators, for instance, the ability to release staff for more important and less routine activities is the overriding objective, even if companies also realize cost savings from such reorientation. And job cuts will inevitably result in lower spending on manual processes.”

On the heels of the Light Reading poll, Morris authored another article on automation that included this assertion from Jeffrey Gao, President of Huawei’s router and carrier Ethernet product line:

“We want to use a few people to manage a larger network,” Gao told Light Reading. “Our target is to use just one tenth of the current people to manage the network in the next three to five years.”

He called this goal a business objective for CSPs and added that Huawei is already working with Swisscom to significantly cut staff in the company’s IP and optical networking business. Morris wrote: “Swisscom has about 400 employees managing those networks, but the figure will drop to just 40 if the plans work out, according to Gao.”

This translates to the disappearance of 90% of operations jobs – 90%. This is far and above the often predicted 30% reduction in telco workforce overall (including ops and customer service), a figure backed up by our own research and that of McKinsey.

Not surprisingly, Swisscom “vehemently denied” that the cuts were a business objective. Telcos do not want to talk about the effect of automation on jobs because it can quickly turn into a PR nightmare.

As one CSP source said to me recently, “We are not talking externally about automation in the context of jobs in this current climate.”

But not talking about it isn’t the answer. CSPs have a responsibility to talk about it – and come up with potential solutions.

CSPs should confront the potential PR nightmare head on with real plans for how to address the effects of automation and AI on people. Certainly, Aaron is right when he says both can create new jobs. CSPs are sorely lacking many skills, particularly in software, cloud and AI, so retraining some of the folks who are working in network operations to do these jobs is possible and necessary.

But there is a big difference between reskilling 30% of the workforce and 90%, and CSPs need to address the chasm between these numbers honestly.

In its report on automation, McKinsey suggests that an automation Marshall Plan may be needed which includes “sustained investment, new training models, programs to ease worker transitions, income support, and collaboration between the public and private sectors.”

If 90% of workers are going to be displaced, something on this scale will be required – and telcos and other tech companies should be leading the effort to develop it.

The TM Forum’s Digital Transformation Asia event is coming to Kuala Lumpur on November 13-15. Disruptive.Asia is an official media partner with the event. All the details you need are right here.